Banks Violette- Banks Violette’s work, Untitled is a spectral, glowing presence resting on a reflective black platform.  Violette was in the 2004 Whitney Biennial and had a solo show there the following year.  I came across his work about the same time and my excitement over first discovering images of his 16′ x 20′ salt-cast remains of a church has not lessened in the intervening years.   Bones of a structure that still thrum with power, this particular work has a dark reality associated with its backstory.  Other cast salt sculptures by Violette do not hold quite the same charge, but they display a Minimalist sensibility, even if conceptually the waters run pretty deep.  And dark.  Link

Chiharu Shiota- Shiota’s web-like work encompasses and mummifies spaces and objects in kind. Her work weaves in different objects such as pianos, chairs, shoes and letters makes the stilling and confining of these objects one that seems to deny performance, voice or use; an interesting notion when coupled with the fact that she studied under Marina Abramović. Another one of her works holds a room full of sleeping women in hospital beds wrested from time and viewed through an interwoven hedge of string- a futuristic sleeping beauty story.  A new surprise for me was seeing her drawings and stills from video installations.  The drawings are narrative and surreal, using a similar palette of red, white and black to tie into her more well known installations.  Link
Dierdre Feeney- I met Dierdre Feeney a few years ago at Pilchuck Glass School.  Originally from Ireland, she currently lives and works in Australia.  Her work captures, in small scale and in glass, historical cinemas as well as architecturally re-imagined magic lanterns.  She captures the moments of ideas, interactions and possibilities by using projection and video with her works so that they glow through the glass and resonate through time.  In her more recent body of work, she has created a different sort of space, My Winter Vault and The Passage reference ancient and historical death chambers and their somber glowing qualities evoke mystery and a timeless waiting.  These pieces seem deeply personal, poetic and appear to be a meditation on the void at the end of life as well as rebirth and renewal.   Link
Amy Honchell- Honchell is a Chicago artist coming from and teaching in the Fiber and Material Studies program at the School of the Art Institute of Chicago.  Honchell works with fibers and installation, and in past works these have appeared as stretchy, translucent membranes that seemed to be stand-ins for skin and bodies. These works have a playfulness to them, and her new work carries the same sense of play, even if a more refined and self aware sort.  Her newer work is made of richly dyed fabrics, sewn together in long pieces that when gathered and folded, appear like landscape and sedimentary lines in sheered rock walls.  Within these gorgeous bundles of color and textured line, small constructions of towers, bridges or scaffolding turn fabric to landscape, and further push us into Honchell’s  miniature world.  Each painted artifact of built civilization leans, lists or bends in clumsy yet charming way into the folding landscape.  Link 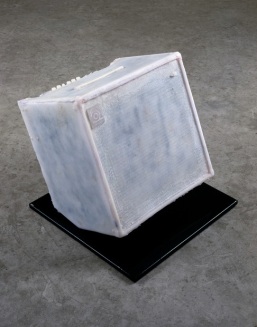 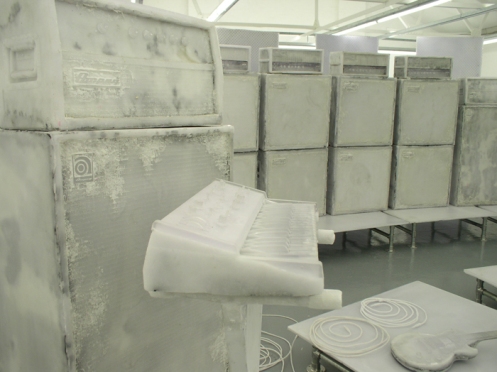 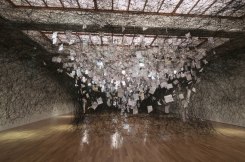 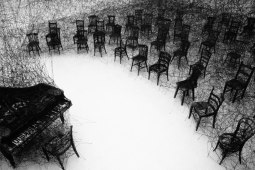 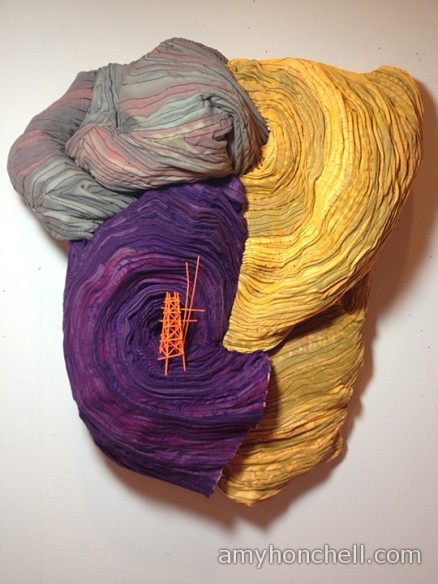 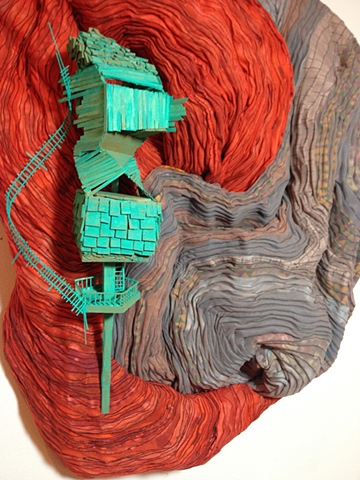 2 thoughts on “Looking Glass: A Monthly Post on Four Artists Who Caught My Eye • March”

Newest stump for the collection. This one is fired ceramic and fiber. Love this black clay!
Looking back to ‘Flood’... 🌊🏡 I borrowed this plastic toy from @melaniehart (and never gave it back), and I had a transcendental experience early in the morning at the pond at #sweetbriar during my residency at #vcca.... this video inspired a lot of work and has made cameos in many of my installations.
This time last year before the world shut down.
Turning some paper works into clay...
Thank you snow and President’s Day for some extra studio time last week! (But ready for sun and warmer temps!) More explosions in the sky. 💥 Ink and gouache on paper.
Ink splotch plume with salt